You cannot apply for this job anymore (deadline was 6 Jul 2022).

MERLN operates in the field of regenerative medicine (RM), a biomedical sciences branch that focusses on developing therapies to treat damaged and diseased tissues and organs. The activities are inspired and driven by advancements in technology.

MERLN’s mission is to become one of the world’s leading research institutes in the field of RM by combining high-quality creative research with training the next generations of interdisciplinary scientists. MERLN’s activities operate at the interface of biology, medicine, materials sciences and engineering, and cover the entire chain from fundamental to translational research. MERLN aims to maximize outreach at the level of public involvement, development and commercialization of research.

MERLN was established in 2014 simultaneously with the Maastricht Multimodal Molecular Imaging Institute (M4I). MERLN is 1 of the 8 multidisciplinary, thematic research schools and institutes of FHML. A recent external review of MERLN over the period 2014-2020 shows that the initially set goals of the institute have been successfully achieved and that MERLN has become a well-known and successful research institute on the European academic map.

After this pioneering period and significant growth, the emphasis in the coming years will be on the sustainable embedding of MERLN in the organizational matrix structure of the FHML, on the synergy with M4I and clinical departments embedded in other research schools and on the collaboration with the Faculty of Science and Engineering of MU.

MERLN is organized in three divisions with, in each of them, several PI-groups. Currently MERLN is home to approximately 130 employees (-- 10% permanent academic staff, -- 80% PhD candidates and postdoctoral researchers), -- 4% permanent support staff, -- 5% temporary support staff, -- 1% ICT and financial staff). Diversity, in all its facets is one of the priorities in the hiring strategy of MERLN. The staff has a large variety of disciplinary backgrounds, comes from approximately 40 different countries and more than 50% is female.

The position as Scientific Director of MERLN is vacant as of September 2022.

The Scientific Director is responsible for strategic development and implementation of research policy, programs, and organization of the Institute.

She/he sets quality standards within MERLN, identifies key developments within the field, translates these to the research areas and facilitates team science within MERLN as well as with other MU/FHML research institutes. The Scientific Director will consolidate and further improve the positioning of MERLN on the (inter)national Regenerative Medicine stage and facilitates that fundamental research will find its way to valorization and (clinical) application and implementation.  The scientific director represents MERLN in relevant local and national academic consultation and steering committees.  As established scientist, the professor actively extends an own research group and international scientific network and participates in education at Maastricht University.

The position is temporary for the duration of 1-year with the prospect of a permanent position in case of mutual positive assessment.

Depending on experience and qualification, the maximum gross monthly salary is
€ 8.881,- (on a full-time basis) in accordance with scale H2 of the Dutch university collective bargaining agreement.

The terms of employment of Maastricht University are set out in the Collective Labour Agreement of Dutch Universities (CAO). Furthermore, local UM provisions also apply. For more information look at the website www.maastrichtuniversity.nl > About UM > Working at UM.

Maastricht University is renowned for its unique, innovative, problem-based learning system, which is characterized by a small-scale and student-oriented approach. Research at UM is characterized by a multidisciplinary and thematic approach, and is concentrated in research institutes and schools. Maastricht University has around 22,000 students and about 5,000 employees. Reflecting the university's strong international profile, a fair amount of both students and staff are from abroad. The university hosts 6 faculties: Faculty of Health, Medicine and Life Sciences, Faculty of Law, School of Business and Economics, Faculty of Science and Engineering, Faculty of Arts and Social Sciences, Faculty of Psychology and Neuroscience.
For more information, visit www.maastrichtuniversity.nl 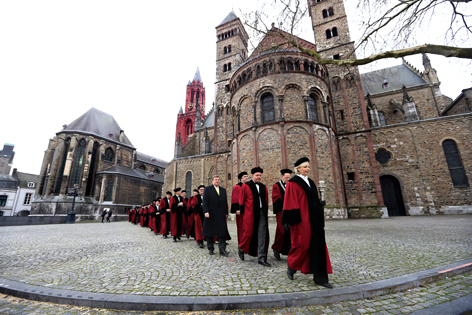 Maastricht University distinguishes itself with its innovative education model, international character and multidisciplinary approach to research and education.